The new SuperCool-Guy album “So That’s How It Ended…” is available now on all digital music platforms. Here's the links: 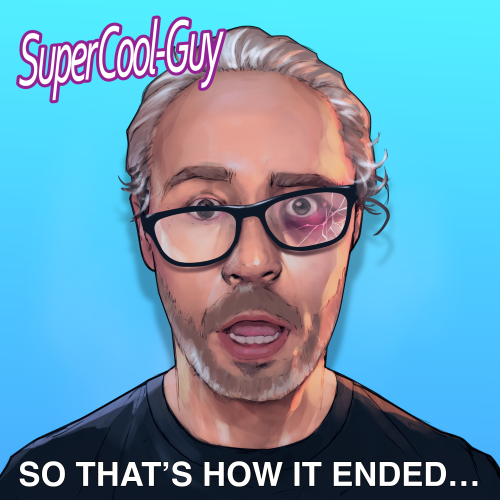 The cover artwork is by the amazing Brazilian artist Abraão Lucas (@abraaolucas).

I wanted to stick with the “SuperCool-Guy” persona and his trademark knocked-over glasses from the previous album cover (“Back in the Groove”). He’s sort of a nerdy guy and the “supercool” brand is obviously meant to be sarcastic and funny.

In the first album, he was the nerdy guy who somehow gets the sexy girls and that gets him all flustered, hence the sideway glasses! A sort of “revenge of the nerds”-type character!

I wanted to evolve him a bit with this new album. Like me, he’s now a bit older… but obviously none the wiser! :-)

DISCLAIMER: the sideway glasses/black eye are not a subtle “one-eye” sign or any mark of submission to satanic music industry moguls or whatever! (*) If they were, I would actually have a music career! :-) SuperCool-Guy will never trade his soul for earthly riches or “success”.

(*) If you have no idea what I’m talking about, check out the excellent https://vigilantcitizen.com and its “Symbolic Pics of the Month” articles. End of disclaimer!

So That’s How It Ended…

At the risk of overthinking it, the album title has at least three levels of meaning for me:

First, taken on its own, it’s an invitation to listen to the record and find out what it is that’s ended and how it ended! I won’t spoil it for you guys, but if you listen to the record and pay attention to the lyrics (one song in particular), I promise that the title will take on another layer of meaning. You might get a little bit of added satisfaction from it!

Second, in the context of the album cover, it’s a bit of slapstick fun: SuperCool-Guy thought he was all cool and whatever he did, that got him punched in the face! That’s how it ended: with a pair of broken glasses and a black eye!

Third, the title is a sort of tragi-comic commentary on current times: while western society – perhaps humanity as we know it, even! – was being destroyed, what was SuperCool-Guy doing? Writing and singing stupid little pop songs! It’s an acknowledgement of the futility of this record.

That is not to say that as a private citizen, I am not politically engaged. But SuperCool-Guy is that part of me that searches for beauty and positivity. While that may seem futile in a world that’s crumbling down all around us, I’m not going to make him political. Like Paul McCartney, he’s going to keep on writing silly little love songs. (What's wrong with that?)

The digital version of the album includes 11 tracks: 10 songs + 1 bonus track which is an alternate version of the song “Ophelia”. (I couldn’t decide which version I liked best so included both!)

Like my previous output, the style is very much “pop” in a very general sense. It’s meant to be positive, uplifting, it has some 80s influences, some rock and house/trance influences even… it’s a bit more electronic, and production-wise, I think it’s the most polished and sonically satisfying music I’ve ever produced.

SuperCool-Guy · Medley - So That's How It Ended...

All tracks composed, arranged, performed and produced by A. Robin / SuperCool-Guy between 2014 and 2021.

Mixed by SuperCool-Guy except tracks 5 by Viceroy and 11 by Adrian Hall.

Mastered by Jon Astley at Close To The Edge Mastering.

Based on and featuring lines from Aldous Huxley's Brave New World (Chatto & Windus, 1932)

With thanks to Nick Luscombe and mscty.space.

6. No More Chasing You

Homage to the City of London’s Lloyd’s building, aka the “Inside-Out Building”.

9. Temple of the Sun

10. Darkness of My Heart

Many thanks to all my super-talented collaborators on this album!